President Trump just wrapped up his first official State of the Union address and there’s really no debate about how well it went.

It was an absolute slam dunk.

Remarkable. You can catch the full speech here if you missed it.

If you watched the speech, you probably noticed a lot of this going on.

Pelosi not feeling this #SOTU speech so far. pic.twitter.com/8pXAfKQ07Y

Basically, the Democrats sat around and scowled throughout the majority of the speech. That’s to be expected. Typically, the opposition party doesn’t stand for all the applause breaks when the president in power isn’t from the same party.

However, the Democrats took things to another level on Tuesday. Democrats refused to stand during moments that should have been bigger than politics. For example, Trump mentioned the booming economy many times.  That’s something Democrats should have stood for even if they believed that he wasn’t the person who deserved credit. The economy is doing well and job creation is strong which means everyday Americans have a better quality of life.  That’s something we should all be happy about regardless of party. But, the Democrats aren’t interested in the things getting better if Trump gets credit. They overwhelmingly proved that with their behavior on Tuesday.

There was one moment that stood out from the rest.

At one point during the speech, President Trump mentioned that black unemployment is at its lowest level in history.

Check out how the Congressional Black Caucus reacted. 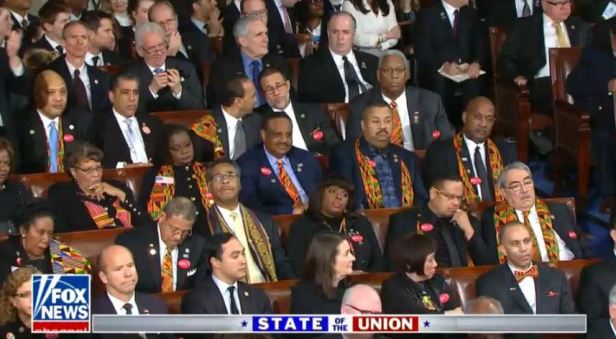 Democrat reaction to Black Unemployment being at a record low #SOTU pic.twitter.com/TZqpaFYQR0

If that doesn’t sum up today’s Democrats perfectly I don’t know what does.

Trump makes the accurate comment that things are better for black unemployment than they have ever been and Democrats are so unhinged and so bitter that they can’t even bring themselves to clap.  It is perfectly clear that they aren’t excited about black people succeeding if it means Trump looks good. That’s disgusting. It’s racial identity politics at its worst.

Useless liberal rags like Vox are pretending Trump shouldn’t be allowed to mention this fact because the numbers have been trending down for a while.

Trump: African-American unemployment stands at the lowest rate ever recorded.

First of all, Obama blamed Bush for the slow economy for 8 years. Obama presided over the worst economic recovery since World War II and he blamed Bush constantly so it’s not like Trump is the first person to politicize this kind of thing. Second of all, so what? So what if it’s been going down for awhile? Trump is still the president and Trump’s policies have very clearly been good for the economy.  Democrats like Paul Krugman and Mark Cuban promised us the economy would crash when Trump took office.

That fact alone gives Trump more than enough justification to tout the fact that black people are doing better than ever one year into his term despite the fact that Democrats promised Americans the KKK (a Democrat institution) was taking over the White House.  You can’t have it both ways. You can’t predict Trump will ruin the economy and then be angry when he mentions that he didn’t.

When you can’t even bring yourself to clap for the fact that Americans are doing better than they were before, that’s when you know it’s time to reevaluate how politics control your life.