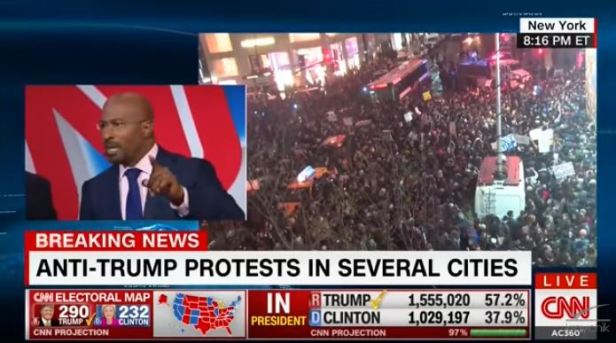 The mainstream media would have you believe that the protesters and rioters who have been calling for the rape of Melania Trump, making death threats, and causing over a million dollars in damage are justifiably fighting back against the evil monster that is Donald Trump.

Any rational observer can see there is no moral equivalency there and if the media was honest they would be taking responsibility for the real reason that we are seeing this violence and disruption.

Their unwavering mission to convince the world that Republicans, Donald Trump particularly, are evil racist monsters.

For 8 years, the mainstream media has persistently labeled Republicans as bad people.  The GOP has been compared to terrorists, the KKK, Hitler, and every other horrible smear you can imagine.  The president, the media, and just about every other institution has been degrading and looking down on middle class conservative (and Independent) voters for years.

Now they are acting surprised that Republicans are fed up?

You would think it would be an easy lesson to learn. But nope, people like Van Jones are still out there doubling down on the same disgusting tactic.

Here is a perfect example of why Donald Trump is our next president.

The only reason people are terrified is because CNN and many other outlets have been scaring the hell out of them for a year with misleading and often times downright wrong information about Donald Trump.

Muslims are scared of internment? There is absolutely zero reason for that if you look at Donald Trump’s statements throughout his enitre life.  The only logical explanation is that some Muslims are nervous because people like Van Jones have been telling them Trump wants to hurt them and put them in jail or something.

Nickarama over at Weasel Zippers had some solid commentary as usual:

No, my dear, we have a divided country because you have spent 8 years ‘otherizing’ people, grouping by race, sex and gender, stoking those fears. You can see that now in the protests and riots.

Van is now denying that he started any rumors of ‘internment’, when he very obviously did. Just like his ‘white lash’ comment. Criticizing divisiveness while stoking it himself.

Donald Trump is a center-right moderate who has no intention of doing half of the things the left is pretending he will.

The media has no one to blame but themselves for Trump’s victory and if you are one of those people stuck in traffic over the next few weeks because protesters are standing in the middle of the freeway you can thank people like Van Jones.