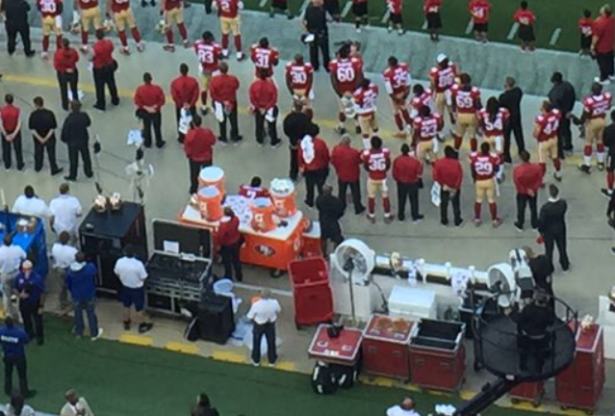 If you think you’re tired of the Colin Kaepernick story, just imagine how it feels to have to write about it all day long for three days.  The guy is a clown and his selfish actions will probably cost him his job.  That should be the end of it.  But, as you can tell, the story is still going strong.

There is no debate among rational people as to whether or not he should have done what he did.  Of course he shouldn’t have.  It was selfish, cowardly, and disrespectful.  It hurt his team.  It hurt the league.  And it failed to prove any coherent point.  However, Kaepernick has helped illuminate some extremely troubling realities with today’s liberal left.

It isn’t surprising that a lot of Americans out there are supportive of Kaepernick’s decision to put his personal politics before the country.  There are plenty of kooks out there.  It was pretty surprising however to see how far the liberal left was willing to take their adoration of the former star quarterback.

Liberals have become completely unhinged over the situation and you can literally feel the excitement when you read articles from these far left sites.  They are basically salivating at the prospect of knocking racist America down a few pegs.

Only someone completely brainwashed by the backwards liberal worldview could possibly cloud the definition of the word patriotic to the point where it could be used to describe refusing to do the most patriotic thing ever.

But that’s how liberals work.  Sticking it to America is always the right answer. Disrespecting the anthem is good. Standing for it is bad.  The world that liberals live in is almost the exact definition of Bizarro World.

Here’s what Shaun King, the white BLM activist who has been lying about his race for a couple years now, had to say about that.

And then there was Shaun King. On Monday, the controversial Black Lives Matter activist and New York Daily News columnist penned a piece explaining “why I’ll never stand again for the ‘Star-Spangled Banner'”: While it has always been known that the song was written during American slavery and that when those words about this nation being the “land of the free” didn’t apply to the millions who had been held in bondage, few of us had any idea that the song itself was rooted in the celebration of slavery and the murder of Africans in America, who were being hired by the British military to give them strength not only in the War of 1812, but in the Battle of Fort McHenry of 1814. These black men were called the Corps of Colonial Marines and they served valiantly for the British military. Key despised them. He was glad to see them experience terror and death in war — to the point that he wrote a poem about it. That poem is now our national anthem.

His logic is that Colin Kaepernick did a good thing by disrespecting all the people who have died for this country and making himself the center of attention because our national anthem is actually some kind of KKK theme song.

Only problem is.  He’s wrong about the origin of the song.

There’s just one problem: These lyrics are describing slaves, who were, as King conveniently points out, hired by the British. This song is not about killing black slaves. It’s about fighting the enemy, be he a decorated British officer or the escaped slave hired to do his dirty work.

Shaun King and his allies might be surprised to learn that Francis Scott Key, a DC lawyer, was initially against the United States’ entry into the War of 1812.

According to History.com, “Key referred to the war as ‘abominable’ and ‘a lump of wickedness.’ However, his opposition to the war softened after the British began to raid nearby Chesapeake Bay communities in 1813 and 1814, and he briefly served in a Georgetown wartime militia.”

OK, the liberal Left asks, then why do we no longer sing that stanza?

According to Encyclopedia Britannica, “The third stanza is customarily omitted out of courtesy to the British.” To the British — not slaves!

Why is that? Because any human being with a moral conscience knows that the enslavement and degradation of others is wrong. Slavery is an ethical stain on the American narrative, but Key, though he owned slaves, wasn’t writing in defense of slavery — he didn’t have to. Slavery was for the most part a given during early 19th-century America.

I’m not exactly shocked that liberals don’t quite have the historical facts straight, they almost never do, but it’s really shocking to watch people like Spike Lee come out and praise a guy simply for sitting down during the one time where people are asked to put the country before themselves.  Spike said that Colin Kaepernick is just like Jackie Robinson.  Sure, maybe, if this was 1972.  It’s 2016 Spike.

Apparently in liberal land, if the country does something you don’t like, you sit down instead of stand for the anthem.  Sorry guys.  It doesn’t work that way.  Patriotism isn’t only for people who love everything about America.  It’s for Americans.  The people who died for this country didn’t die just for white people.  They died for all of us and the least you can do is put your phone down for a minute and mumble a couple words.

Even Colin Kaepernick has no idea what he’s talking about.  Check out the shirt he was seen wearing after he pulled his little stunt. 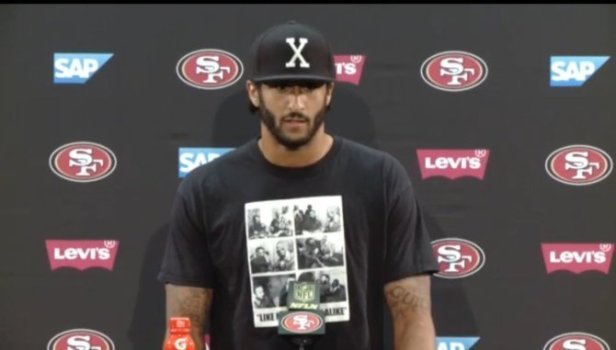 So let’s get this straight.

He won’t stand up for the national anthem because it represents “oppression”, but yet, he can walk around with a T-shirt on celebrating one of the most oppressive dictators ever who was responsible for the death of thousands of his own people. Brilliant.

It’s also fun watching people try to criticize Colin’s critics by making the argument that Colin has the “right” to protest.  Of course he does.  No one on the planet has made the argument that he doesn’t.  That’s completely irrelevant.  The fact is that he did it and deserves whatever criticism that comes from it.  People have the “right” to feel disrespected as well.  Including the many brave men and women who defend the flag every day.  The conversation has nothing to do with whether or not Colin has the “right” to sit down. This is America, everyone knows that if you think it’s cool to disrespect the flag you can do that.  The conversation is about whether or not it was a logical move, whether or not there should be push back, and whether or not it was disrespectful.  The answer to all those “ifs” is very clear.

There were a million different ways Colin Kaepernick could have brought attention to the issue of police brutality.  The guy is worth millions of dollars, heck, he could have started a foundation if he wanted to. He could have made a substantial donation to BLM.  But he didn’t do that.  He chose to sit down during the national anthem and make the story about him.  He chose to take a swipe at the identity of our country.  Why? Because he clearly harbors a deep sense of animosity and resentment towards it. That’s nothing to celebrate.

And just for fun, since we are already here, check out this video from Prager University explaining how Colin isn’t even correct about his original point.  I can guarantee you haven’t heard some of these statistics about police brutality.