We talk a lot about media bias and it is clear to any fair minded observer that the mainstream media has an incredible amount of power.

Sometimes, talking about it isn’t enough.  Sometimes, visual examples are the most compelling.

Yesterday, it was announced that the CEO of the DNC was resigning due to the disastrous email leak that exposed some serious corruption in the establishment wing of the party.

That’s a huge deal.  DNC leadership is falling apart.  Can you imagine the press coverage if this was happening at the RNC?

Check out this snapshot from the MSNBC homepage that an awesome SGR follower (Thanks Pablo!) sent us.

I barely know how the internet works let alone how to figure out how to make this image larger but if you can’t tell, the top 10 stories there on the right don’t even mention the resignation.  It’s all stories about how Obama and Hillary are great, Trump sucks and Trump is a racist blah blah blah.

Not a word about the DNC turmoil.  Or anything else for that matter.  An entire page devoted to bashing Trump.  Even liberals have to admit that’s ridiculous. Right?

Politico managed to mention it, in microscopic fashion surrounded by a million articles bashing Trump. 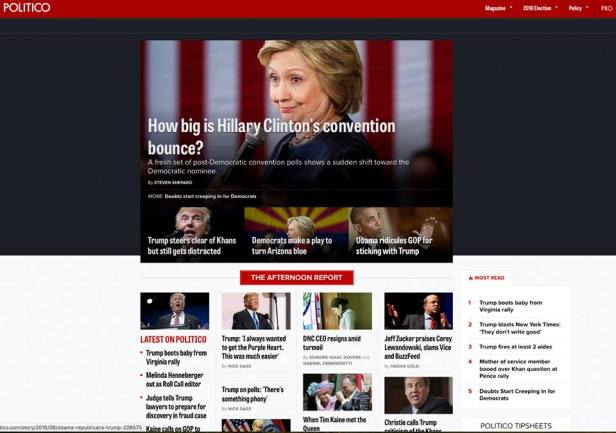 I’m not complaining about how things aren’t fair.  Everyone knows that. The media is completely in the tank for the Democrats and they probably always will be.

But, it’s important for people to be aware of the propaganda they are being fed and understand how critical it is to research things for yourself.

At this point, if you are trusting places like Politico, CNN, or MSNBC (no hyperlink needed) to get information then you need to seriously reevaluate some things in your life.