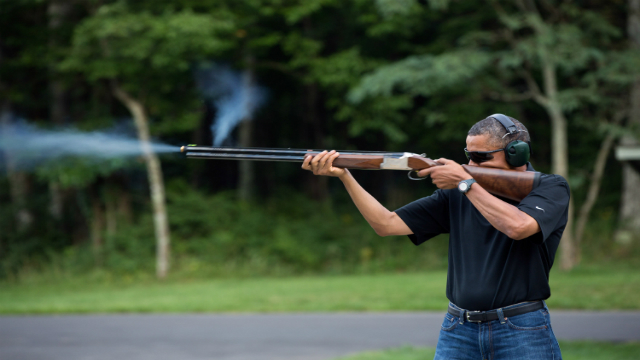 President Obama came out and slammed 2nd Amendment supporters almost immediately after the terrible news broke today that 10 people had been killed in a shooting at an Oregon college.

But that didn’t stop our fearless leader and the anti-gun crowd in general from politicizing the event to fit their own agenda.

Here are some of the most embarrassing tweets from the left that started flooding the internet before anyone had a clue what was going on.

Another devastating shooting. We need sensible gun control measures to save lives, and I will do everything I can to achieve that. -H

Again, Hillary had NO IDEA what had happened when she tweeted this. No mention of the families or those in harms way.  Nope, straight to politics.

Oh my god, Oregon State. When will this stop? This is madness. We must stop the NRA & its choke … https://t.co/0iJOViyOSm

I’ll be honest, I don’t know who this is but she has a blue check mark next to her name so I’m going to roll with it.  Judging by the edgy “Stand with PP” profile picture I am going to guess she didn’t get famous from anything related to brain power or critical thinking skills.  Yeah let’s eliminate the NRA, that’ll destroy every gun on the planet and make sure crazy people don’t get them…

Don't wait to talk about it.

Another shooting, don’t wait to find out what happened, attack your conservative friends regardless.

How can you be SO aggressively pro-life and not move an inch on gun control? You baffle me.

Spoken by someone who clearly has absolutely no understanding of what it means to be pro-life.

Your right to a semiautomatic weapon does not trump my right to walk into a classroom or a movie theatre and walk out alive.

What are you talking about?

Hey NRA supporters! 12 people shot dead in OR. Better start spinning! Oh…and fuck you with your pro-life-phony-Christian Cammo pants on.

Meanwhile, in the real world, Ben Shapiro was having an absolute FIELD DAY on Twitter.

Utilizing Obama's gun logic to fight terror, I hereby declare the planet an ISIS-free zone. That should do it.

Remember, folks, the left has no modest positions on legislation. They only have gradualism in the pursuit of utopia.

Obama: "How can you, with a straight face, argue that more guns will make us safer?" Why don't you ask your Secret Service, Mr. President?

Vox and WaPo, please do a comparison of car accident deaths to angry spouse homicides. I mean, as long as we're making idiotic charts.

It is looking very likely that the shooter was targeting Christians.  If it comes out that he was inspired by radical Islam, how many of these celebrities do you think will tweet with the same amount of conviction urging the world to confront ISIS with force?

I’m going to go with ZERO.