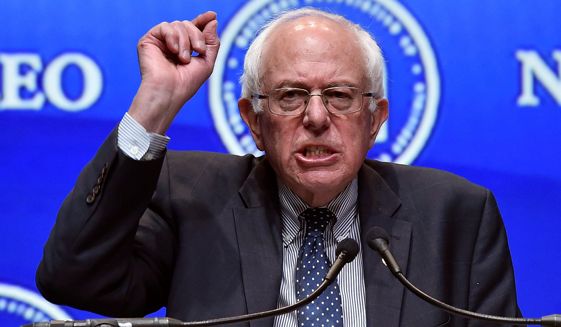 One of the most excruciating aspects of the recent election cycle has been the lionization of Bernie Sanders by crazed millennial know nothings.

If you speak to a Sanders supporter, they will refer to the senator from Vermont as if he is some larger than life figure who doesn’t bend to the status quo and won’t take cues from anyone except for the people.

The kind of straight shooter we need to fix Washington.  Right?

Not only is Bernie not the solution to fixing Washington, he is Washington.  He embodies everything that is currently wrong about the last 7 years of Democratic rule.

From The Wall Street Journal:

Sen. Bernie Sanders, whose liberal call to action has propelled his long-shot presidential campaign, is proposing an array of new programs that would amount to the largest peacetime expansion of government in modern American history.

In all, he backs at least $18 trillion in new spending over a decade, according to a tally by The Wall Street Journal, a sum that alarms conservatives and gives even many Democrats pause. Mr. Sanders sees the money as going to essential government services at a time of increasing strain on the middle class.

His agenda includes an estimated $15 trillion for a government-run health-care program that covers every American, plus large sums to rebuild roads and bridges, expand Social Security and make tuition free at public colleges.

To pay for it, Mr. Sanders, a Vermont independent running for the Democratic nomination, has so far detailed tax increases that could bring in as much as $6.5 trillion over 10 years, according to his staff.

How is this new?

This is the exact same rhetoric Democrats have been preaching for decades.  The only difference here is that he doesn’t try to hide it by misleading the people into thinking he is a responsible spender like so many of his liberal colleagues choose to do.

No rational person can look at a country that is almost $20 trillion in debt and say that the solution is $18 trillion in new spending.

The incredibly weak Democrat field leaves Bernie with a shot at the nomination which would surely set the Democratic party back for years once these regressive ideas start to gain more media attention.

Which isn’t necessarily a bad thing.

One thought on “WSJ: The Financial Burden Of A Bernie Sanders Presidency Would Be Astronomical”