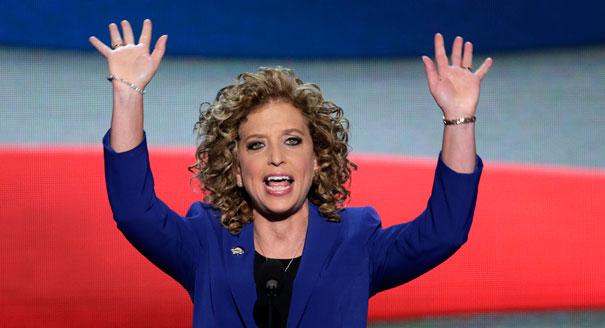 Another day, another painfully awkward interview from DNC Chair Debbie Wasserman Schultz.  Videos of DWS stumbling through pedestrian interviews have become something of a trend lately and ironically enough the times she has had the most trouble is when she has been fielding softball questions on liberal friendly MSNBC.

This time, the head of the Democratic Party was asked the unbelievably simple question of how are Democrats different from Socialists.  Socialism, the most destructive and oppressive political system in modern history is something that should be extremely easy to condemn and contrast with the state of today’s Democratic party.

Her answer? She didn’t even have one. Not ONE.

Mixed in with some incoherent rambling about how Republicans are evil, Wasserman Schultz completely dodged the original question posed by Chris Matthews on his chronically unwatched show “Hardball”.  This strange response highlights several different ugly truths about liberalism today.  Most notably, the unavoidable fact that Debbie Wasserman Schultz is not fit to be the spokesperson of the Democratic Party if she can’t handle a question as silly as this one.  But it also exposes the uncomfortable fact that today’s Democratic party isn’t that far removed from the definition of socialism.

DWS clearly didn’t want to upset the fringe of her party which clearly holds a romantic view of the failed political ideology as evidenced by their odd fascination with admitted socialist Bernie Sanders.  Wasserman Schultz was visibly uncomfortable in the first part of the above clip where Matthews basically urges her to label Sanders as the marginal candidate he is but she just couldn’t bring herself to do it.

When the head of the Democratic Party is literally speechless when asked to explain how she isn’t a socialist, that’s a problem. Or at least it should be.